A Place of Our Own

by Frank Cruz and the New Deal 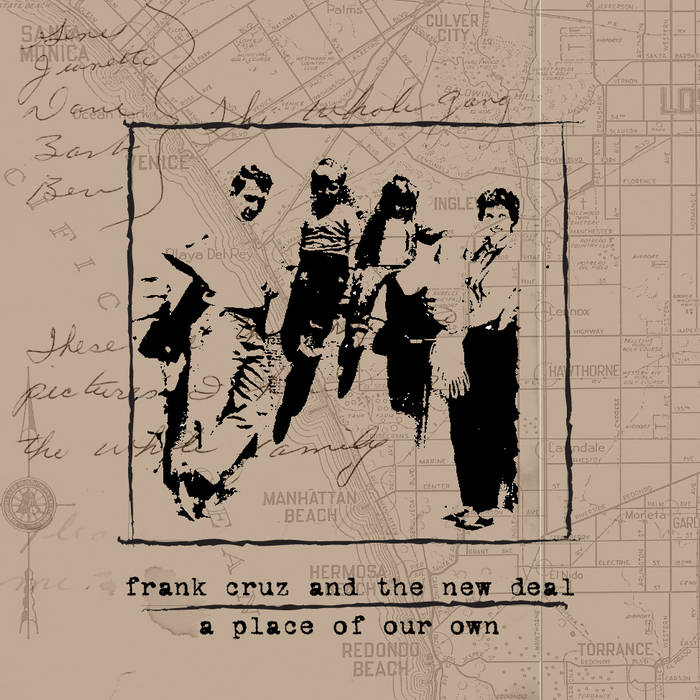 In advance of their forthcoming full-length album, Frank Cruz and the New Deal, hailing from Oakland, CA, are proud to present this handmade, limited edition 4 song E.P.

Featuring the talents of full-time New Dealer Chris Dixon, as well as a distinguished rhythm section consisting of Danny Casentini (Manatee, Dot Commies, Poor Bailey) and John Snapp (Poor Bailey), “A Place of Our Own” charts a course between the aural textures of Explosions in the Sky, The New Amsterdams, and early Death Cab for Cutie and the literate gravitas of Pedro the Lion and Iron & Wine.

The resulting 4 songs are both intimate and expansive, managing to be about Cruz’s very specific characters and settings, and at the same time about something much more universal: the highways and homesteads, heartaches and old family photographs we all know too well.

“A Place of Our Own” begins on the highway, with Cruz sending well wishes to those nearest and dearest as he moves out and moves on. The traditional folk structure and instrumentation of “Highway 101 Serenade” (acoustic guitars, harmonica, and Hammond organ) are complicated by the juxtaposition of feedback, samples, and lo-fi beats, creating an effect that’s both comforting and disorienting, all at the same time.

While “Highway 101” is about leaving home for unnamed destinations, track two outlines a completed journey, following Mean Gene across the country, as he searches for a town that might “give a man a break.” When Cruz’s title character finally arrives in Los Angeles, circa 1960, the resulting musical arrangement--complete with handclaps and a fantastic walking bass line—suggests that hope remains, even as the lyrics reveal uncertainty.

“Furniture & Photographs,” the third track on “A Place of Our Own,” helps announce a shift away from the acoustic/singer-songwriter territory the New Deal deftly occupied for the first half of the E.P. Chris Dixon’s electric guitars gradually grow and swell into a wash of delay, reverb, and ebow, before a rhythmic acoustic guitar, recalling the intimate arrangements of the previous two songs, help to usher in the rest of the band. Though Danny Casentini's drums keep the 4/4 time impeccably well, Cruz is forced to judge temporality by the positioning of furniture in an old girlfriend’s childhood home, as a visit down memory lane leads to a confrontation with the ghosts that inevitably haunt there.

It seems as though Cruz can't get out the words out fast enough on the E.P.’s closing track, “We Have the Technology.” Featuring an almost danceable bass line courtesy of John Snapp, “Technology” is kicked up a notch by Dixon’s freewheeling guitar riff that recalls the Get Up Kids and even John Mellencamp at their very best. And while “A Place of Our Own” began with leaving home, the final track marks a return: this song ends not with another solo departure, but with Cruz welcoming us to come along--“Come on, baby, let’s go home.”

In the E.P.’s closing measures, Frank Cruz and the New Deal claim “we’ve found a place of our own.” And in many ways, these new recordings fit in perfectly with that sentiment. It's sonic cartography can be described as one of leaving home and coming back again, and figuring out how to be a little bit better along the way.

Bandcamp Daily  your guide to the world of Bandcamp

MF DOOM is given his flowers, plus appearances from MC Jada Imani and Stanley Ipkuss